Join Our Whatsapp Community (Coming Soon) To Get 50% Off !

Free Shipping On All Orders Above INR 500 !

With the influence of diet consciousness, there has been an increasing trend of consuming foods that are beneficial for the body. Millet and Quinoa are two delicious grains that are becoming popular for their high nutritional content. Millet is an ancient grain often used in ancient civilizations, and it is now gaining renewed interest due to its unique balance of amino acids and proteins. It contains various vitamins and minerals like Phosphorus, potassium, and magnesium, as well as B vitamins and dietary fiber

How are they similar?

Millet and Quinoa look quite similar, and their growth patterns are comparable. These grains require a warm temperature to flourish and are traditionally found in tropical climates. Millet and Quinoa have a relatively short harvest time of around three months, allowing farmers to produce multiple crops throughout a growing season. They’re both high in fiber while low on the glycemic index, making them both ideal gluten-free food sources that won’t spike blood sugar levels.

How are they different?

Although Millet and Quinoa can provide a vital source of plant-based protein, fiber, and essential vitamins, there are some specific differences between them. Millet is an annual grass that grows in many climates worldwide and is small with smooth-textured kernels.

On the other hand, Quinoa is a seed that belongs to the same family as spinach and chard plants, grown mainly in South America for its high mineral content. Although Millet and Quinoa can be cooked into a porridge or added to baked goods, Quinoa has recently become more mainstream due to its versatility since it holds a crunchy texture even when cooked.

Talking about the appearance of both Millet and Quinoa, Quinoa is present in red, black, and purple varieties, but people mostly consume white or ivory varieties. Millet has various varieties, including white, red, yellow, and grey.

Nutritional information for both Millet and Quinoa

Both are great sources of fiber, proteins, Phosphorus, iron, and other essential nutrients. While most of their nutritional values are similar, there are also some subtle differences. For instance, millet contains more magnesium than Quinoa and provides a better supply of manganese.

On the other hand, Millet consists of higher proportions of selenium than Quinoa; this is particularly beneficial for fostering a strong immune system. Additionally, both have low-fat content but contain significant amounts of carbohydrates per serving—making them both good energy sources. 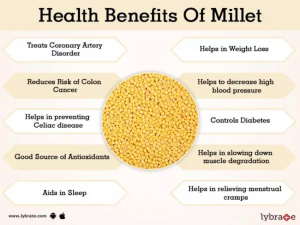 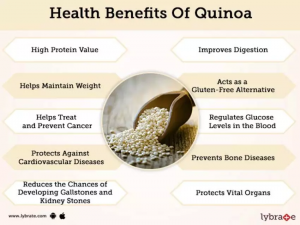 Cooking of both grains

Quinoa preparation is like rice preparation in that it takes about 15 minutes. On the other hand, Millet requires a lot more effort to prepare. It absorbs more water and grows larger. If you properly hydrate it, you’ll get a bowl of fluffy grains with a texture between mashed potatoes and pasta.

In conclusion, both grains are healthy and can provide vital nutrition when included in daily diet. For any food to be part of your daily diet over the long term, convenience is one of the most important factors. Thus, we bring you premium quinoa and millet cookies. Additionally, you can also include more millet in your diet in the form of our soups, health drinks, dosa, noodles, biryani etc.